Grolsch is a company with a rich heritage.

The beer brewery has a history which stretches back to 1615.

In 1615 Willem Neerfeldt founded a brewery in the village of Grolle, which has now become Groenlo, in the Dutch province of Gelderland. His daughter married Peter Cuijper, who was appointed Guild Master of the brewers' guild of Grolle in 1676.

In 1895, this successful brewery, known as 'De Klok' (The Clock), was taken over by their descendants who sold it to Theo de Groen, offspring of another true family of brewers. Meanwhile, in that same year, a number of textile manufacturers, merchants and bankers decided to set up another beer brewery, 'De Enschedesche Bierbrouwerij'.

During the First World War ingredients were in short supply, causing the quality of the beer to drop, accompanied by a sharp fall in sales. The management of De Enschedesche Bierbrouwerij therefore decided to sell the business to Theo de Groen.

Grolsch's new state-of-the-art brewing facility, located on the border between Enschede and Boekelo, became operational in 2004, replacing the old breweries in Enschede and Groenlo. Grolsch is part of Asahi Breweries Europe Group since October 2016.

Dive into the rich heritage of Grolsch as beer and Grolsch as brand. Discover how the small brewery of the past blossomed into the modern brewing facility it is today.

How Grolsch was founded

It all starts on 11 May 1615, when Willem Neerfeldt buys a property in Grol (Groenlo) to start a brewery. One of his brewers, Peter Kuijper, will later on be known as the founder of Grolsch beer.

Peter Kuijper marries Jenneken, the daughter of Willem Neerfeldt. According to tradition, Peter is very passionate about brewing the most delicious beer. He tries hard to win the hand of Jenneken. Only by marrying her would he be able to take over the brewery, as it had to stay in the family.

The story goes that he was rejected three times because his beer had not attained perfection. Only when he succeeds in making the ultimate beer with two types of hops does she agree to marry him. In 1676 Peter Kuijper is chosen to be Guild Master of the brewers’ guild in Grol (Groenlo). Peter demonstrates an enormous talent for brewing beer and keeps perfecting his expertise.

In 1684 Peter Kuijper dies a rich man. His family keeps the brewery going, at the same location on the Kevelderstraat in Grol until 1876. The brewery is passed over the generations from one son to another, until in 1806 a Kuijper daughter marries a Harperink fellow. The name of the owner then changes to Harperink.

The brewery becomes well-known under the name “De Klok” (The Clock). The alehouse “De Lange Gang” remains managed by the Harperink family until the 20th century. And of course Grolsch beer is still served there today. 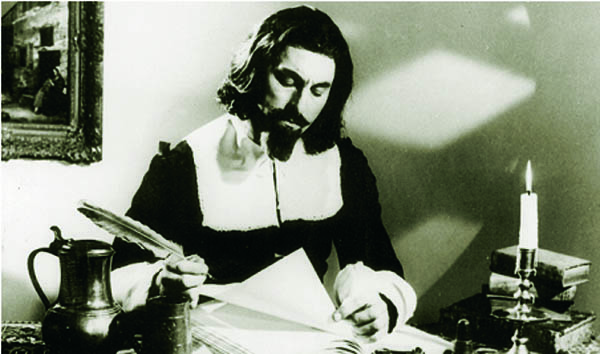 Because the demand for Grolsch keeps growing, in 1876 a second brewery is built just outside the city walls of Groenlo. This brewery is also called “De Klok” and is located on the Eibergseweg.

Grolsch beer is brewed in Groenlo until the new brewery in Boekelo (near Enschede) opens. 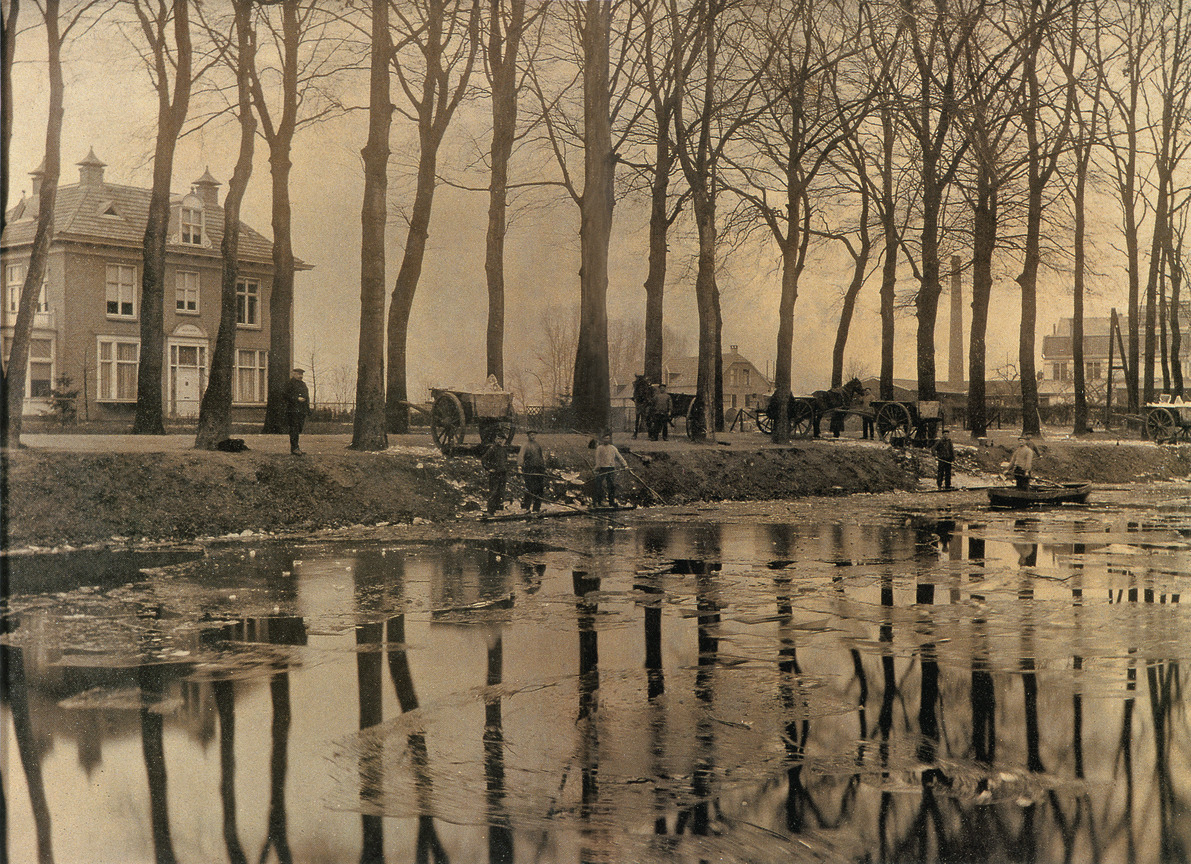 In 1895 several local industrialists, merchants and bankers decide to open a brewery. Nearby towns have thriving breweries, so why not the larger town of Enschede? The textile industry is attracting increasing numbers of residents, creating a growing market in the process. The Enschede Beer Brewery (E.B.B.) opens in 1895. 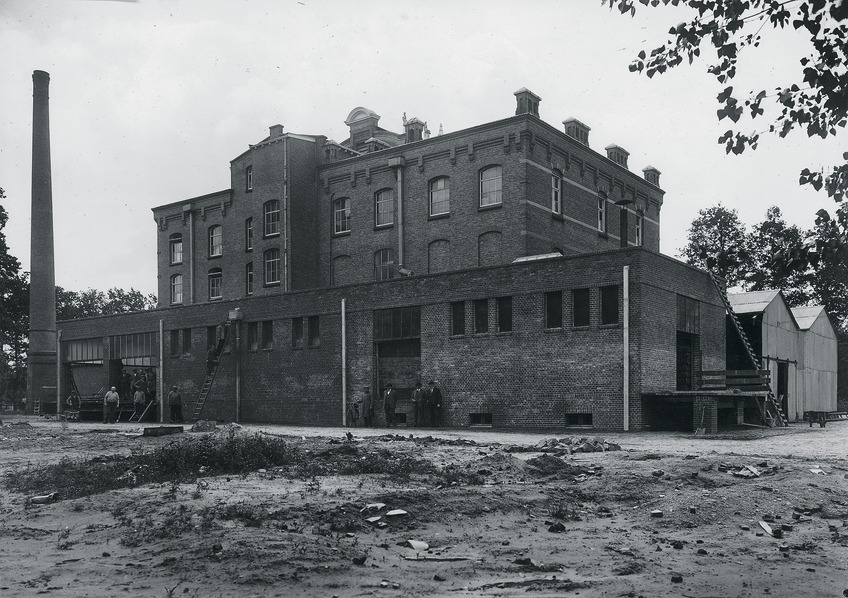 Introduction of the swing-top bottle

Around this time a brewer from an authentic brewers’ family from Utrecht is working in Groenlo. This brewer, Theo J. de Groen, buys the Grolsch beer brewery “De Klok” from the Harperink family in 1897. His three sons, Theo, Cobus and Andries, will later be in charge of the brewery.

In 1897 Theo de Groen introduces the half-liter swing-top bottle, which has a porcelain cap, a rubber gasket and a metal clamp. This bottle becomes renowned in the first advertisements thanks to its advantages:

In the course of time, the crown-cap bottle largely takes over the market, yet Grolsch director De Groen sticks with the swing-top bottle. His motto is: “I get to determine what I put my beer in”. 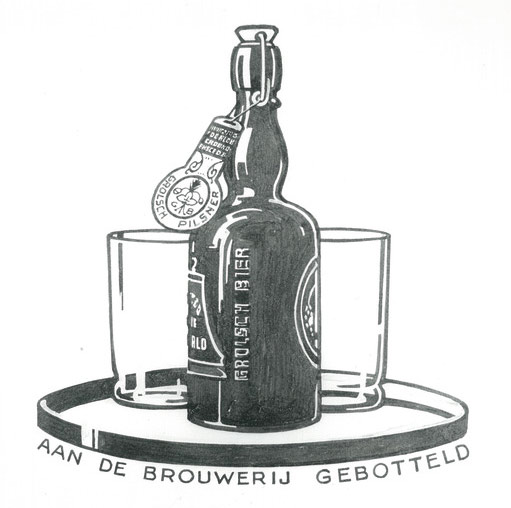 The years of the First World War are difficult for the Enschede Beer Brewery, and recovery in the postwar years is rather limited.

This is why Theo de Groen, who is expertly running a brewery in Groenlo, is asked whether one of his sons (Theo, Cobus or Andries) could breathe new life into the Enschede Beer Brewery. De Groen is actually more interested in a merger with his own Grolsch brewery “De Klok”. And so N.V. Bierbrouwerij “De Klok” Enschede-Groenlo, with locations in Groenlo and Enschede, is established in 1922.

Andries and Cobus remain in Groenlo, and Theo Jr. takes charge of the Enschede brewery. 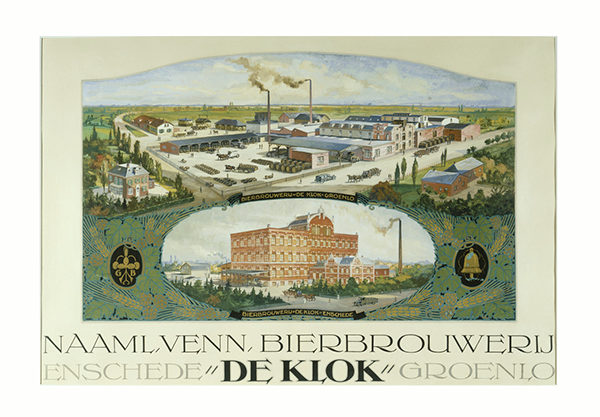 To draw people back to beer after the two world wars, beer brewers start advertising for the first time. Initially they do it together (“Beer is best again” – Het bier is weer best), but later on Grolsch choses to go at it on its own.

In 1949 Theo de Groen hires advertising professional Gerard Brummer, who would later become the first Grolsch executive who was not part of the de Groen family. In the late 1950s, after the first “Beer connoisseurs demand Grolsch” (Bierkenners vragen Grolsch) advertising campaign, Gerard Brummer comes up with the motto “Craftsmanship is Mastery” (Vakmanschap is Meesterschap), which is still inextricably associated with Grolsch.

Around 1960 Gerard Brummer decides to hire renowned photographer Paul Huf. According to Huf “Gerard found that the craftsmanship of an expert offers an ideal comparison with the craftsmanship with which Grolsch beer is brewed”. Many films and photographic reports of working artisans were to follow; this was one of the most successful and longest-running advertising campaigns ever in the Netherlands.

The “Craftsmanship is Mastery” motto is still used as a ‘signature’ in virtually all Grolsch products and marketing materials. 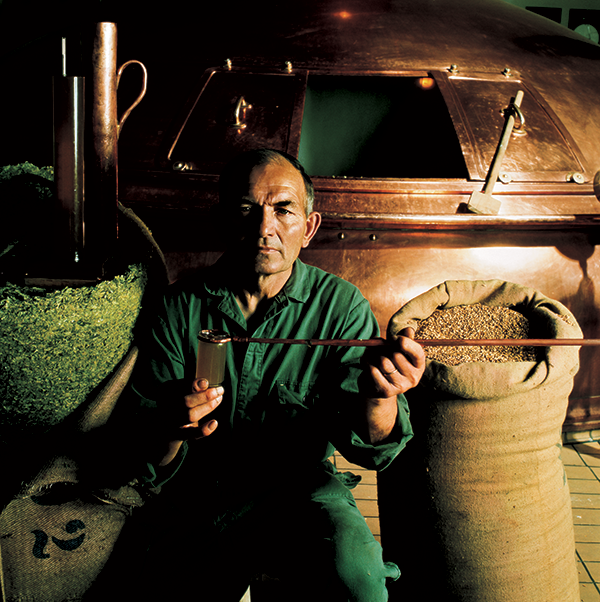 Over the years the swing-top bottle undergoes several adaptations to keep up with increasingly fast production processes. In the early 1960s it acquires a more streamlined look. Ten years later the design is changed again to accommodate modern, fully automated production processes.

The typical Grolsch relief décor with the hop cones and the ear of grain can still be seen in the swing-top bottles nowadays. In 2008 Grolsch introduces the green swing-top bottle. 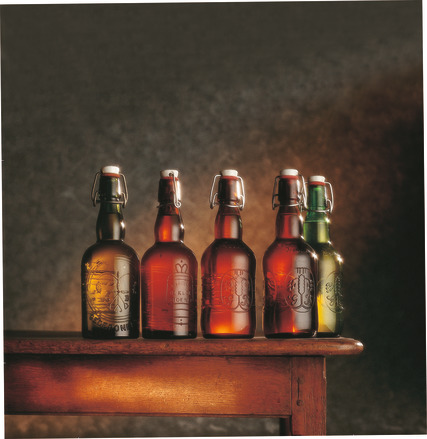 Although Grolsch has been exporting beer since 1946, active efforts only start in 1972. Up to then, thanks to its expanding success in the Dutch market, the company had not really been interested in other countries. But now the green swing-top export bottle stands out everywhere in the world among the competition from multiple import brands. In the early 1980s the advertising agency is assigned the difficult task of surpassing the “Craftsmanship is Mastery” motto.

And yet, a new legendary catchphrase is born within no time: “One day … you no longer drink beer, you drink Grolsch!” (Op een dag … drink je geen bier meer, maar drink je Grolsch!). The campaign presents Grolsch as a high-quality beer for modern, self-aware people with a grown-up, individual taste. 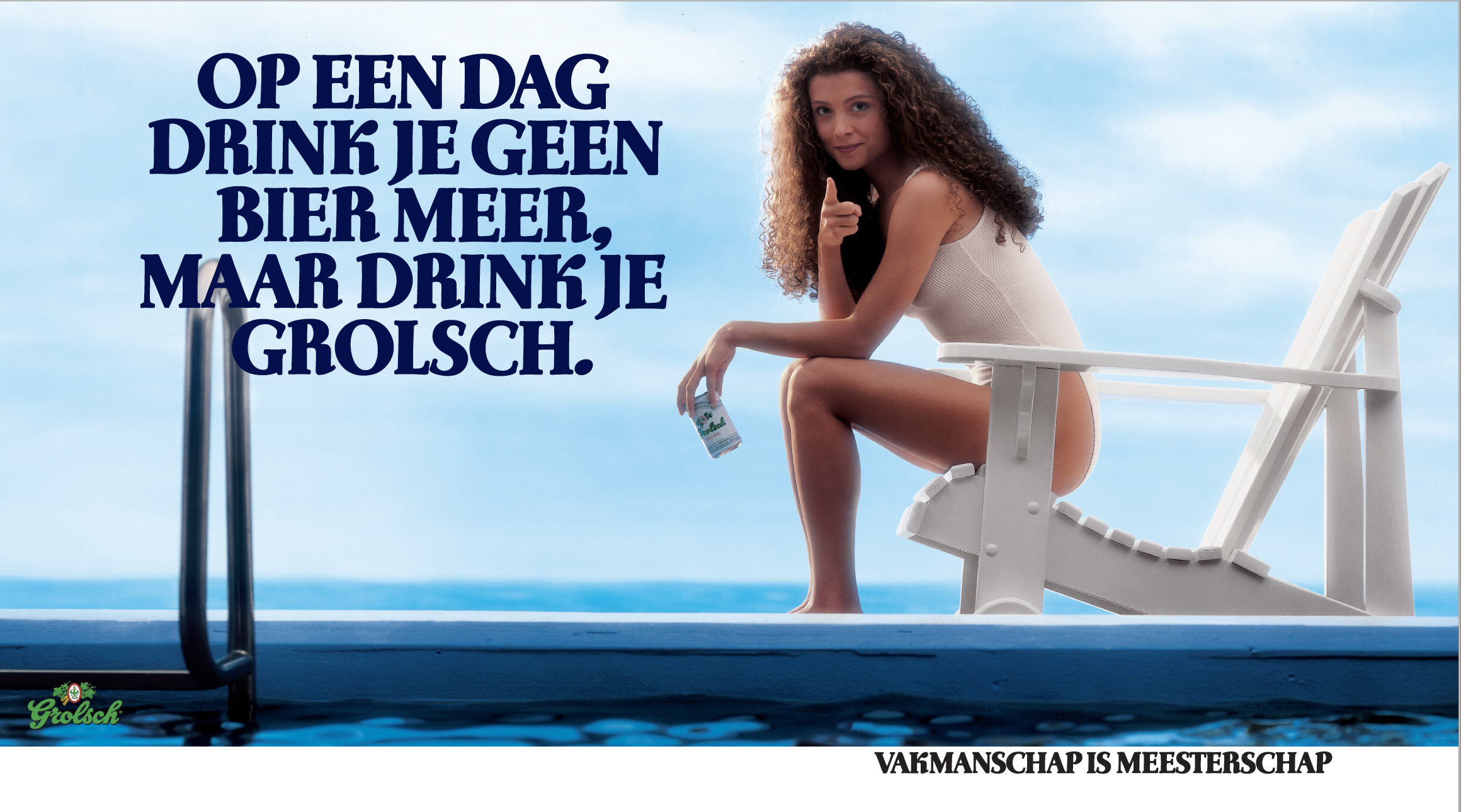 The artisanal craftsmanship and high quality of Grolsch did not go unnoticed. In 1995 Grolsch receives an honorary distinction that is given to Dutch businesses that have been prominent for over 100 years and enjoy an impeccable reputation.

The brewery earns the designation of “Royal”, changing its name from Grolsche Brouwerij N.V. to Koninklijke Grolsch Brouwerij N.V. 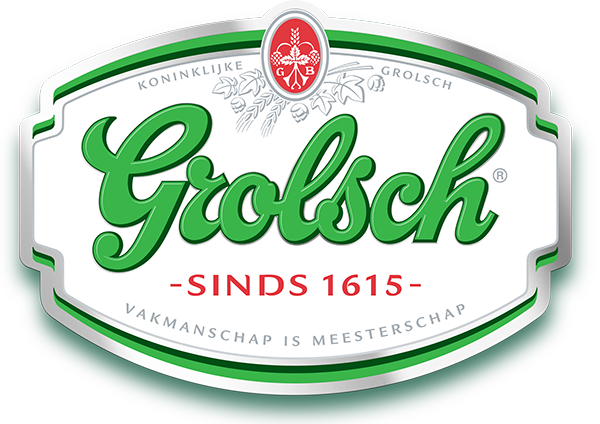 Centenary of the Grolsch swing-top bottle

In 1997 the Grolsch swing-top bottle has been around for 100 years. To lavishly celebrate this memorable milestone, Grolsch brings out as many as six specialty beers in a swing-top bottle throughout the anniversary year:

The strong specialty beer “Kanon” turned out to be a keeper, as it is still available today.

In 1997 a new advertising campaign is launched. This time, under the theme “When it’s time, it’s time for Grolsch” (Komt tijd, komt Grolsch) Grolsch builds further on solidifying the brand in the minds of consumers.

This is a splendid theme which, just like all the other campaigns, brings about several short films and advertisements that many in the Netherlands undoubtedly still remember. 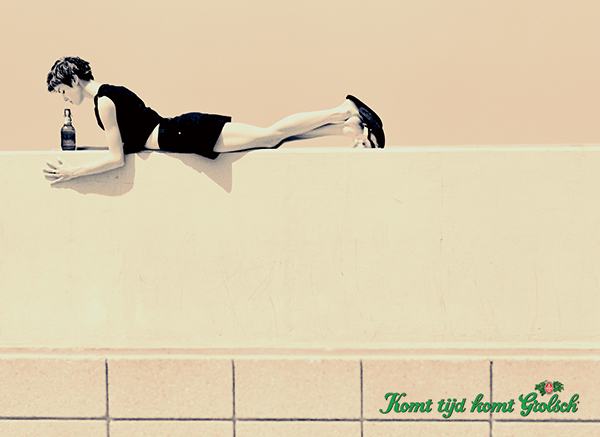 Grolsch and the fireworks disaster

On 13 May 2000, just after 3:30 PM, there is a devastating explosion at SE Fireworks, a fireworks factory located only 200 meters away from the brewery.

The Enschede brewery is not spared. It stops operations temporarily and the administrative personnel is forced to move in with their colleagues in Groenlo. It takes six months for the brewery to be fully operational again. In 2001 a new advertising campaign is launched, aimed at making the Grolsch brand “more accessible” to a wider audience. “There’s beer and there’s Grolsch” (Je hebt bier en je hebt Grolsch) taps into a more social feeling and creates the image of Grolsch as a great beer for any occasion. In 1998 it is decided to build a new brewery that will replace the locations in Enschede and Groenlo. The first stone is laid on 30 May 2002.

In 2004 the new brewery is ready and the first Grolsch beer is brewed, still following the 400-year-old tradition but using the latest technology. The brewery is one of the most advanced in the world, besides being very efficient and environmentally friendly.

Under the motto “A good neighbor is worth more than a distant friend” (Beter een goede buur dan een verre vriend), that year Grolsch brews an exceptional beer: Grolsch Noaber, a specialty brew for all old and new neighbors. 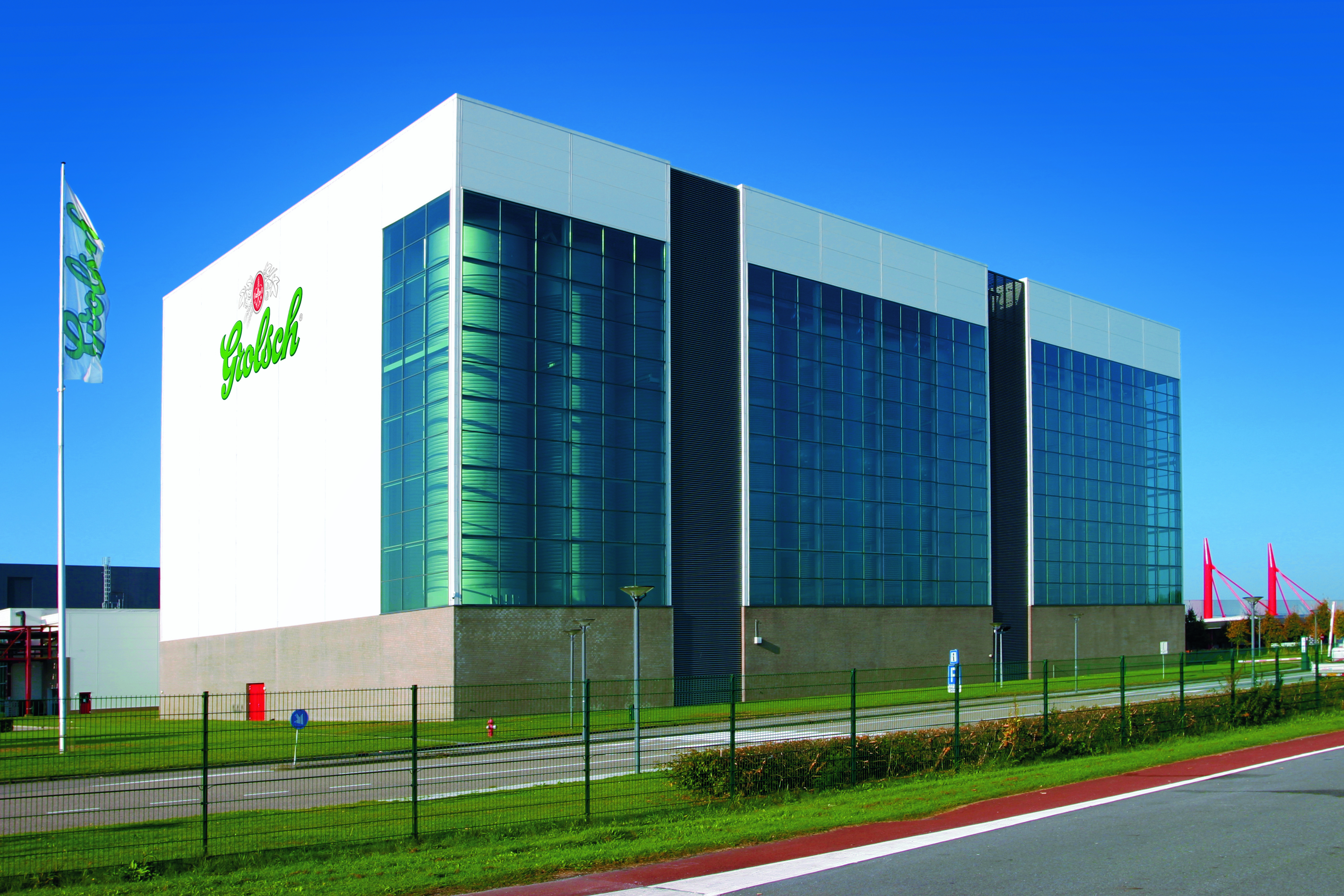 The beer market has been shrinking for some years now, partly due to the introduction of other drinks. This is why in 2005 Grolsch starts a new advertising campaign theme, “Beer, Grolsch style” (Bier op z'n Grolsch).

This motto confirms, just like every campaign that the brand has ever launched, that Grolsch is a distinguished quality beer. On 5 February 2007 Grolsch introduces a new, transparent green bottle that will replace the old brown bottle. The stylish new bottle, with its striking design and magnificent details, causes quite a revolution in the beer world. The bottle has flattened sides, a vertical Grolsch relief on both sides, and the symbol of the two hop types on its shoulder.

Beer now has a look and is showing off! In February 2008 Grolsch is taken over by SABMiller (from South Africa). 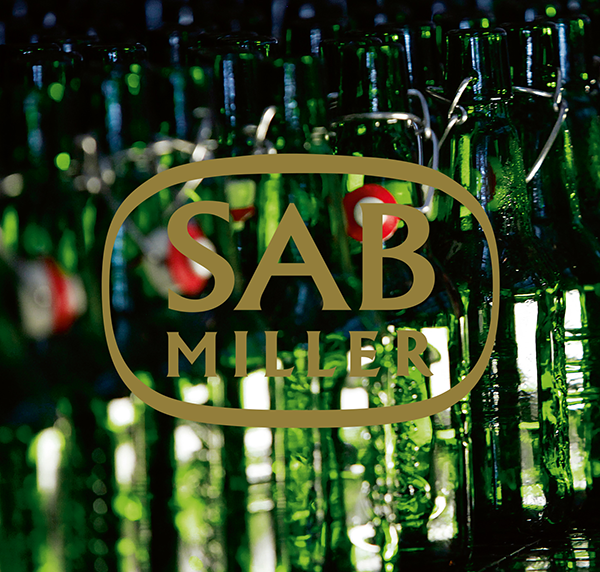 Grolsch has been voted most sustainable beer brewery three times in a row by the brand-comparison site Rank a Brand. Rank a Brand has mapped out the sustainable performance of several beer brands in the Netherlands in terms of climate and environmental policy.

Aspects in which Grolsch scores well are use of sustainable barley, hops, packaging, and low water and energy use. 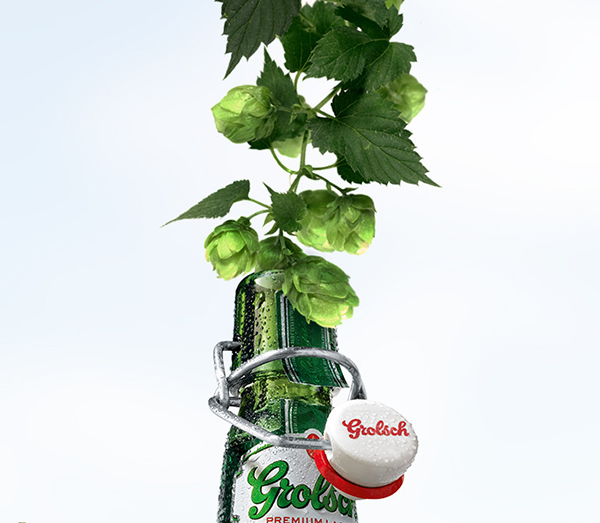 In 400 years – since 1615 – we have grown into one of the oldest and largest beer breweries in the Netherlands.

To draw attention to 400 years of Grolsch, we are launching the new campaign “Grolsch celebrates 400 years of character” (Grolsch viert 400 jaar karakter). Craftsmanship and character, two pillars that have been part of the Grolsch DNA since its foundation in 1615, are central themes in this campaign. 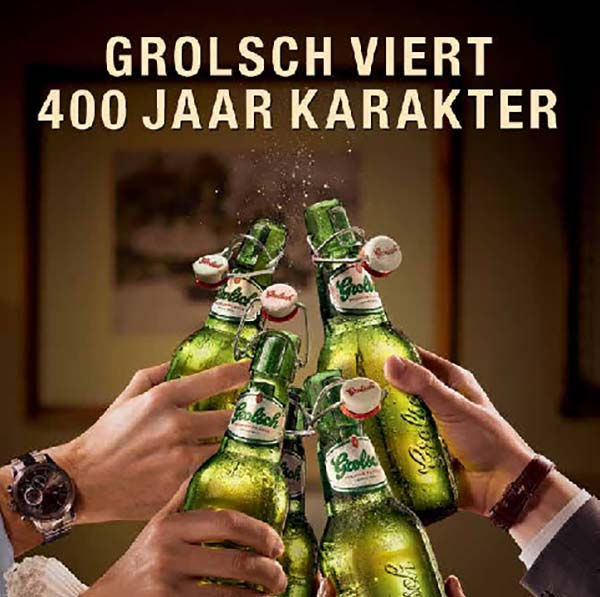 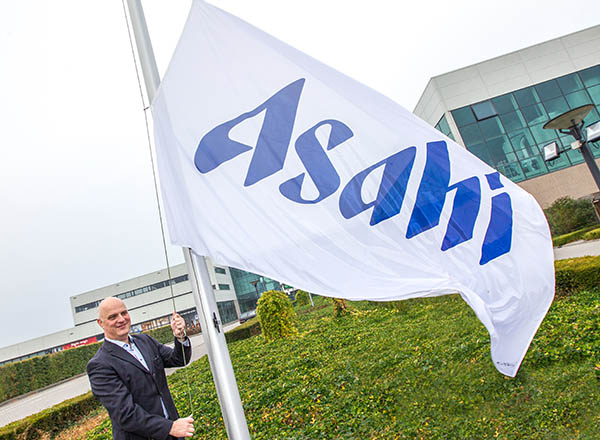